If you were to hold up an object just 1mm diameter at 1m distance, then the area of sky covered would, statistically, contain some 10,000 galaxies. This would represent an area one ten-millionth of the total sky. These galaxies can actually be seen in the deep field photographs taken by the Hubble space telescope. They appear to be close together but are in fact stacked behind each other with enormous distances between. Light from the most distant galaxies that we can see has taken 14 billion years to reach us. So we see distant galaxies as they existed 14 billion years ago. And each galaxy will typically contain 100 billion stars. Our own Milky Way galaxy is one such typical galaxy. So in that one incredibly small section of sky we are talking about a million billion stars.

If we then try to extend that to the whole sky we can just start to grasp the enormity of the Universe.  A vastness of space, time, and material that is all beyond our ability to visualise.


In the last 20 years our ever more sophisticated telescopes have revealed thousands of planets around our nearest stars and we now think that planetary systems around stars is far from unusual. Of this countless number of planets only a small number will be in what we consider to be the habitable zone for water based life (there may be other life forms of course, but we can only home in on the life forms we know)

So statistically there could be, even with our own galaxy, a huge number of life bearing planets. If we put things into a time perspective, we are very confident that the universe has existed for some 14 billion years. Earth for 4.5 billion years. Primitive life on earth for 3.84 billion years. Multicellular life for 0.5 billion years, human life for 0.0002 billion years. Modern technology for 0.0000001 billion years ( about 100 years say). The chances of other life forms being just where we are in terms of technological development are very slim indeed. They are likely to be way behind us or way ahead of us. In terms of making contact the ones way behind don't count. But the ones way ahead present us with a very real problem. Why haven't we heard from them? A civilisation thousands or millions of years ahead of us would be capable of making contact (even assuming that the constraints imposed by our own understanding of physics really do apply). Not only do 'they' not visit us, but we on Earth have been searching for signs of 'their' intelligent life for 50 years now through many multi-million dollar SETI programs, and have found absolutely nothing. What is going on? Why the silence?

There are several theories around but the two most likely contenders are:

Theory 1. As a species evolves to develop and use technology its social and political infrastructure cannot develop fast enough to cope, the technology gets out of control, and ends up effectively destroying the species that creates it. In which case that species would only be capable of communicating for a sliver of time before going in to self destruct mode. We can see this scenario developing all too clearly here now on planet Earth. And looking at how we treat other species, not to mention other groups within our own species, perhaps it's no more than we deserve. 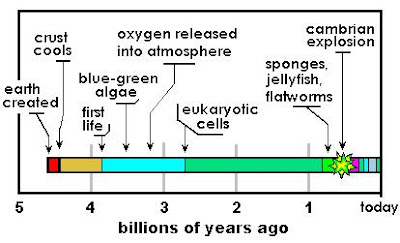 Theory 2.  We can, using modern DNA techniques, trace all multicellular species back to a single ancestor ( LUCA - Last Universal Common Ancestor).  We think that LUCA may have evolved in hydrothermal vents deep in ocean trenches. The big question is how did LUCA come about. For a billion years before LUCA there were only single celled organisms. A widely held view is that at some point, two single celled organisms combined, one being enclosed in the other and the combination was somehow able to reproduce to make similar complex (eukaryotic) cells. The thinking is that this combination of crucial biological capabilities then gave rise to an explosion in multicellular life forms, leading eventually to intelligent life and us. A common single ancestry indicates that this chance combination happened only once in the billions of years that  life has existed. So we are possibly here as a result of an extremely unlikely chance event. Possibly so unlikely that is may have happened only once anywhere - here. Which may explain the silence. Perhaps the  human species is the only life form that is even aware of the vast universe let alone having the capability of understanding and exploring it. If this is the case then we are precious beyond words.

Personally I tend to this second theory. And if we really are so precious I think that places an enormous responsibility on each of us.